By tracking how the office chair evolved with the changing nature of work, we can better understand how we ended up sitting on kinetic sculptures of mesh and metal today, and where the office chair might go next.

If you’re reading this article at your workplace or a home office, there’s a strong chance you are sitting in a chair. There’s an even stronger chance that this chair exhibits certain features—a swiveling base with spokes, rolling casters, tilt movement, adjustable height.

If you’re in possession of a nicer specimen, your chair may offer adjustable lumbar support and armrests, mesh fabric for better air circulation as you work, and a high-density cushion that evenly distributes your weight.

This set of traits loosely defines what we think of as the modern office chair. But how did this definition evolve? It’s no exaggeration to claim that the office chair is one of the most important design objects in our daily lives: the average white collar worker spends five and a half hours a day sitting at work.

Given the modern materials, clean lines and mechanical complexity of high-end office chairs today, it may be surprising to learn that the office chair as we know it today was born more than a century ago. By tracking how the office chair evolved with the changing nature of work, we can better understand how we ended up sitting on kinetic sculptures of mesh and metal today, and where the office chair might go next.

Before the nineteenth century, most of the global workforce was employed in agrarian labor—an “office chair” was only relevant for the wealthy, government officials and academics. In fact, Charles Darwin is the earliest known adopter of a proto-office chair, grafting wheels onto a normal chair in the 1840s so he could swivel between specimens. It goes without saying that this was a fairly uncommon use case.

Then came the railroad, the advent of manufacturing, and the Industrial Revolution. As the traditional model of labor was upended, more administrative workers were needed for logistical coordination and bookkeeping, and the concept of general and administrative workers was born. Businesses empowered by rail access in scaling and expanding to new markets employed more and more people—creating a cadre of middle managers.

This was the first time in history that productivity accrued on a mass scale from people sitting indoors. As white collar workers became a crucial economic resource for the first time, their bosses began to recognize the value of making them comfortable. 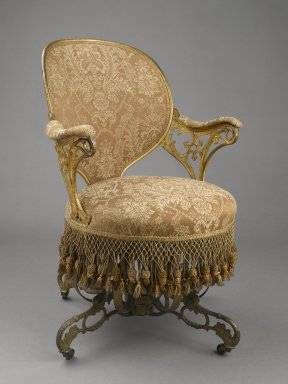 Enter the first mass production office chair: the Centripetal Office Chair, designed by the inventor Thomas Warren and launched by the American Chair Company in 1851 at the Great Exhibition in London. The example depicted to the right now sits in the Brooklyn Museum.

It looks dated, but the chair was surprisingly functional by today’s standards. Made of cast iron and upholstered in velvet, the chair’s standard features included full tilt movement enabled by four large springs concealed in the frame, a revolving seat, and casters for movement.

The chair sold poorly outside the United States, because the Victorian norms prevailing in the Anglophone world at the time viewed comfortable seating as immoral. The Centripetal Chair was too ergonomic for its time.

But Victorian propriety was hardly a lasting bulwark against the rising tide of a manufacturing / service economy. As the Industrial Revolution culminated, the growing tide of office workers took notice; the most popular attraction during the 1876 Centennial Exhibition in Philadelphia was the Office Furniture Exhibit. Meanwhile, specialty chairs for barbers and dentists had started to introduce the components and materials that would power the modern office chair. 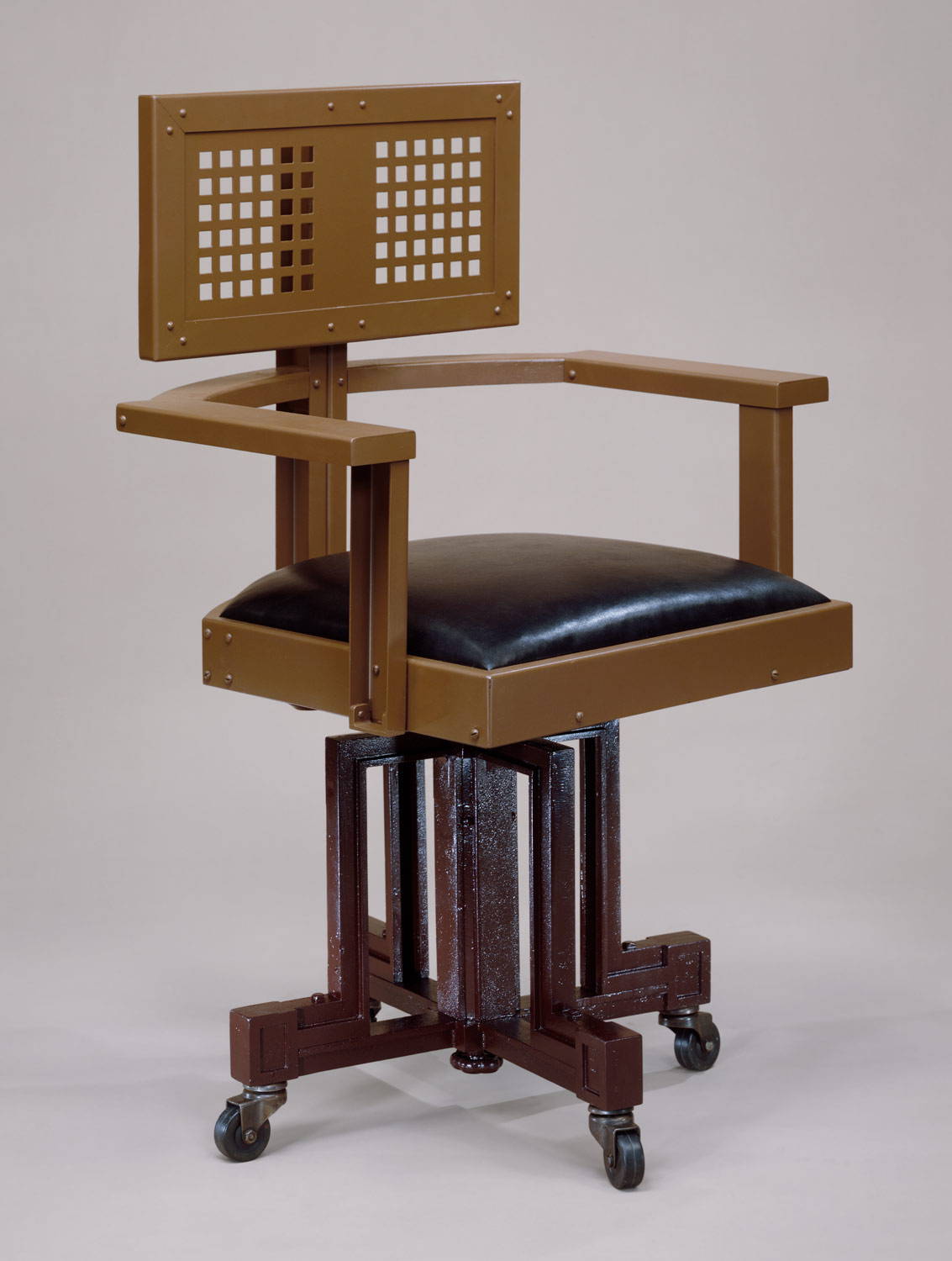 By the early twentieth century, the desk job was a staple function in the worldwide economy, and industrial designers had risen to the occasion. But they didn’t focus on comfort. The question at stake was architectural alignment with the rest of the space.

Frank Lloyd Wright designed the office chair on the right to accompany the Larkin Building, an office building he designed in 1904. The chair was lauded for its innovative height adjustment mechanism, but lacked—to say the least—the human-centered design features that we take for granted today. He made an even less comfortable, three-legged version called the “suicide chair,” intended for the largely female secretarial staff.

Although the Victorian era had faded, comfort was still linked closely with laziness in the minds of managers, and design decisions tended to be informed by cost and congruence with the prevailing architectural style.

Office chairs evolved into a recognizable form after World War II. This was no accident: ergonomic research played a tremendous role in the design of instruments of war, like tanks and plane cockpits, as well as the factories that produced them. 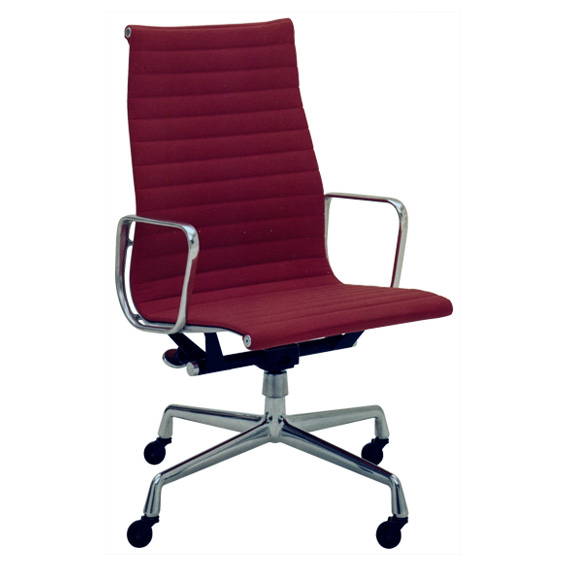 Combined with post-war industrialization and the emergence of the United States as a full-fledged manufacturing and services economy, the office chair had renewed purpose and a huge body of declassified military research waiting to inspire new designs.

The Aluminum Group Chair by famed designers Ray and Charles Eames features sleek lines, metal spokes and plastic casters. Look familiar? Many office chairs of this era look like—and in some cases, are—the same chairs we might sit on today.

But aesthetics, not ergonomics, still drove the design of chairs. The mid-century modern aesthetic produced beautiful furniture for the growing mass of office workers, and proved popular enough to produce plenty of business for chiropractors and orthopedic surgeons.

The era of the ergonomic office chair began in earnest in the 1970s. Several catalysts played a role in the popularization of ergonomic design. Notable among these were series of books—particularly Humanscale, by the designer Niels Diffrient—that popularized the ergonomics findings of military and industrial researchers, and made them accessible to the design community at large.

Advanced materials spilled over from Cold War and Space Age research, and an American surgeon George Phalen began spreading the word about a mysterious condition afflicting office workers called carpal tunnel syndrome. In 1970, President Nixon signed the Occupational Safety and Health Administration Act (OSHA) into law, ensuring that companies which failed to provide a safe work environment would be penalized. 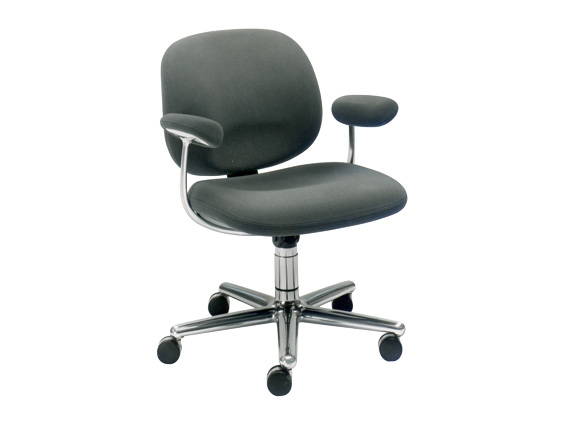 These factors culminated in the Ergon Chair, designed by William Stumpf and released in 1976. Although it lacked the configurability of modern chairs, it used molded foam that conformed to our natural sitting position—a landmark in ergonomic design. Later designs like the popular Aeron chair took these principles and carried them forward, applying advanced materials like breathable mesh and 3D aided-design.

The end result of this process are modern office chairs, the best of which mold to our needs in ways that would be hard to imagine for Thomas Warren or Frank Lloyd Wright.

Future of the Office Chair

The office chairs we interact with every day—and sometimes take for granted—are the culmination of a century-long process shaped by design trends and socioeconomic factors alike. The results have been nothing short of spectacular. As design objects, the best office chairs on the market today have reached a pinnacle of aesthetic and ergonomic excellence.

If that’s true, what’s next for the office chair? Although research is still ongoing, preliminary studies have begun to show that most office workers should sit less and stand more. The office chair of the future may be lighter and more modular to account for the fact that it will be used in specific, task-oriented ways.

But chairs will always be part of our workplace experience. The fundamental problems with the ergonomic office chair today are accessibility and flexibility, not design. With prices rising to the four-figure range for premium chairs, the best chairs are largely inaccessible to the mass market of knowledge workers.

And the way we procure office chairs today—buy it once, stuck with it forever—doesn’t align with the reality of a workforce populated in greater numbers by freelancers, remote workers and high-growth companies with need that change fast.

The most impactful design innovation to come may be the combination of time-tested design with a fundamental restructuring in the way office chairs are bought and sold, so more workers can take advantage of quality materials, ergonomic best practices and beautiful design. Until then, take a moment to lean back in your chair and acknowledge our debt of gratitude to the designers that helped us sit the way we do—comfortable, in style, and ready to work.

Your cart is empty.
Start Shopping